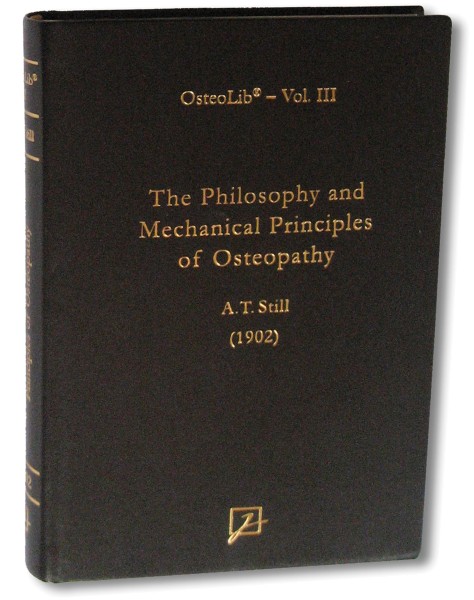 Beschreibung
Beschreibung
100 YEARS AFTER A.T. STILLS DEATH: A TRIBUTE TO THE DISCOVERER OF OSTEOPATHY!... mehr
Menü schließen
Produktinformationen "The Philosophy and Mechanical Principles of Osteopathy (1902) - English!"

100 YEARS AFTER A.T. STILLS DEATH:
A TRIBUTE TO THE DISCOVERER OF OSTEOPATHY!

THE AUTHOR
A.T.Still, the founder of osteopathic medicine was born in Virginia in 1828. After sehrving an apprenticeship under his father, he completed additional coursework at the College of Physicians and Surgeons in Kansas City, Missouri, He went on to serve as a surgeon in the Union Army during the American Civil War. After the Civil War and following the death of three of his children from spinal meningitis in 1864, Still concluded that the orthodox medical practices of his day were ineffective and devoted the next ten years of his life to studying the human body and fi nding better ways to treat disease.
His research and clinical observations led him to believe that the musculoskeletal system played a vital role in health and disease and that the body contained all of the elements needed to maintain health if properly stimulated. Still believed that by correcting problems in the body‘s structure, through the use of manual techniques, the body’s ability to function and to heal itself could be greatly improved.
He also promoted the idea of preventive medicine and endorsed the philosophy that physicians should focus on treating the whole patient (“triune nature of man”), rather than just the disease. At the time, these beliefs formed the basis of a new medical approach, osteopathic medicine.

THE BOOK
Osteolib series Vol III.
This book is Still’s creation of a textbook for use in Osteopathic schools. Like his other books, it is written in layman’s language to students as a guide in learning Osteopathic principles and treatment as well as in thinking through medical problems. Still calls for progress in the medical profession to advance the healing arts by seeking truth and not relying on drugs for treatment. He likens learning Osteopathy to being a carpenter’s apprentice, a correlation that illustrates the hands on nature of Osteopathy. One must have a teacher present to learn effectively.